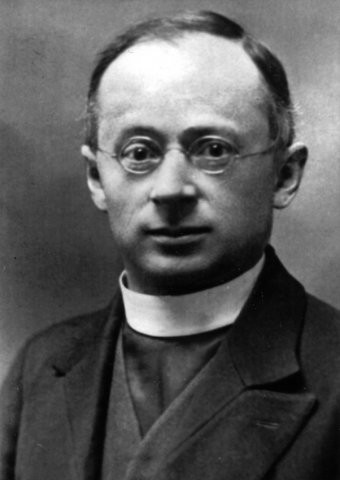 One of the individuals who died in the Nazi concentration camps was a simple, humble priest who simply loved his God, his Faith, and his fellow man. Otto Neururer was born in Tyrol, Austria, in 1881. A bit frail and also timid, at a young age he began experiencing bouts of depression. Nevertheless he had a brilliant mind and recognized his vocation to the priesthood. He wanted to join the Jesuits and do missionary work, but his frail health prevented that. He was ordained to the priesthood in 1907.

In 1938, while pastor of Sts. Peter and Paul in Innsbruck, he advised a young woman against marrying a divorced man whom he knew was a philanderer as well as a con man. The man had ties to the Nazi party and reported the priest, who was sent to the concentration camp at Dachau for “slander to the detriment of German marriage.” At Dachau he was routinely tortured.

The following year he was moved to Buchenwald, which was under the command of Martin Sommer, “the hangman of Buchenwald”. There another prisoner asked him for Baptism.  Father Otto suspected that it might be a set-up, but he couldn’t refuse in case it wasn’t. But it was, indeed, and the camp commander ordered him taken to the “punishment block” and hanged upside down. The priest lived for 34 hours, while still murmuring his prayers. Fr. Otto died on May 30, 1940, the first of more than 2,600 Catholic priests killed under the Nazis in hatred of the faith.

Fr. Otto Neururer was beatified by St. John Paul II in 1996. May he intercede for us.