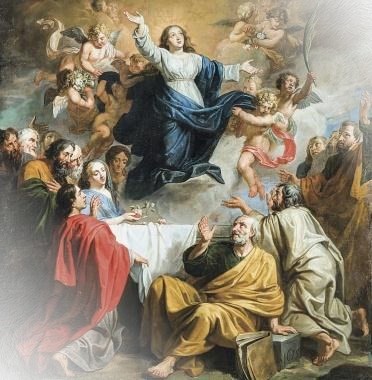 The central mystery of Mary’s life and person is her divine motherhood. The Assumption completes God’s work in her. It was not fitting that the flesh that had given life to God himself should ever undergo corruption.

Even though the Assumption of Mary was not declared a dogma until 1950, the Church has held this teaching sacred from her earliest centuries. The Eastern rites of the Church in Egypt and Syria developed liturgies to the Blessed Virgin Mary celebrating her Dormition very early on. By the end of the sixth century, this feast had spread throughout the Eastern Empire and was to be celebrated on August 15.

This tradition made its way to France in the sixth century and was celebrated on January 18. Eventually this feast of the Dormition became known in the West as the Feast of the Assumption of the Blessed Virgin Mary, a teaching was accepted and celebrated in the universal Church in both the East and West. In 1950, in the Apostolic Constitution Munificentissimus Deus, Pope Pius XII proclaimed the Assumption of Mary a dogma of the Catholic Church in these words: “The Immaculate Mother of God, the ever-virgin Mary, having completed the course of her earthly life, was assumed body and soul into heaven.”

The Marian dogmas do not take away from our relationship with Jesus Christ, but only increase and strengthen it. If you want to get to know a person, spend time with his mother. The more time we spend with Mary and learn about her, the more we will come to know and love her Son Jesus.