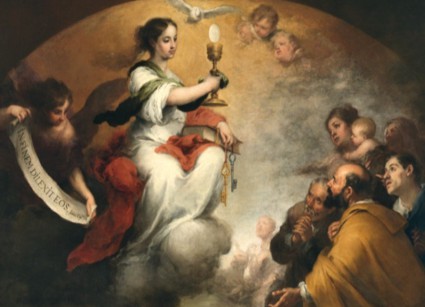 It is impossible to make sense of Jesus apart from his Jewishness… One reason that we have today such a difficult time appreciating [him] is that we have become indifferent to, and/or ignorant of, the Bible.

The Council of Chalcedon in 451 [described] Jesus as the coming together of two natures—divine and human—in the unity of the divine person, a more conceptually exact rendition of what John the Evangelist tells us in the prologue to his Gospel: “And the Word became flesh and lived among us” (John 1:14). The Word of God’s covenantal love has now entered into a radical union with the flesh of this particular Israelite, Jesus from Nazareth.

Now, covenant and sacrifice are always linked. [So], when John the Baptist spies Jesus, he…says “Look, here is the Lamb of God!” (John 1:36). Jesus is the one who will play the role of the sacrificial lambs offered in the temple. In accord with our formula—no communion without sacrifice—Jesus, the covenant in person, will per force be a sacrificed victim as well. Jesus came, in short, to be the suffering servant who would, through a sacrifice, take away the sins of the world.

[By] the ultimate sacrifice of the Lamb of God, [t]he final enemy, [death], had to be defeated [so that] God and his human family could once again sit down in the easy fellowship of a festive meal. [Paradoxically], he would conquer death precisely by dying…. By enduring the pain of the cross, Jesus did indeed bear our sins; by his stripes we were indeed healed.