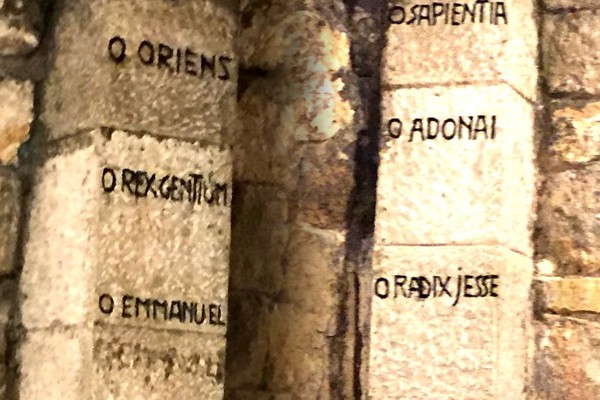 The O Antiphons, also known as The Great Os are Magnificat antiphons used at Vespers of the last seven days of Advent as well as the alleluia verses on the same days in the Mass.

They are referred to as the “O Antiphons” because the title of each one begins with the interjection “O”, and each one names one of the attributes of Christ mentioned in Scripture. They are:

The exact origin of the O Antiphons is not known, but their use was prevalent in monasteries and it may be concluded that in some fashion the O Antiphons have been part of our liturgical tradition since the very early Church.

The first letters of the titles taken backwards appear to form a Latin acrostic “Ero cras” which translates to “Tomorrow, I will be [there]”. Therefore, the Lord Jesus, for whose coming we have prepared in Advent and whom we have addressed in these seven Messianic titles, now speaks to us: Tomorrow, I will come. So the O Antiphons not only bring intensity to our Advent preparation, but bring it to a joyful conclusion.